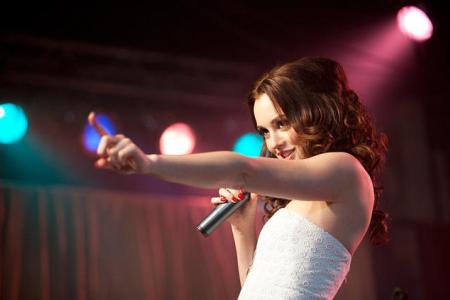 It Just happened to be, that most of the leading actors of Gossip Girl has a singing career aside of acting and Leighton is no exception. All the fans of Blair are interested in Leigton Meester singing, what her voice sounds like, but there is not hard to imagine that delicate sweet melodies seem to go well with the persona of Meester. Leighton Meester started her music career in 2007, the same year she got the role in TV show Gossip Girl. That year Leighton recorded the soundtrack of the movie Drive-thru, the song was called Inside the black. In 2008 Leighton recorded a duet with Tony Bennett in an episode Entourage. In April of 2009 young actress released her first song Birthday, that was recorded with Awesome new Republic. Soon after the release Leighton Meester signed a contract with Universal Republic record company. Polow Da Don, Harvey Mason , Jr, Spencer Nezey and Leighton Meester begun working on album release in the fall of 2009. However, this album was postponed several times, at first till the early 2010, and then till the late 2010 and finally the album release was canceled and it never came out. As it is known, Leighton Meester managed to release two of her songs from the contract with Universal Republic.

Somebody to Love was the first official Leigton Meester’s single that hit the charts. It was released in July of year 2009 featuring Robin Thicke, well known R’n’B singer. Your love is a Drug was the second official single that was digitally produced by Leighton in March of 2010. Leighton Meester taped a duet Front cut with DJ Clinton Sparks that appeared available on the internet in February of 2011. Make it rain was the single that never was released, though Leigton worked on it together with Lil Wayne. Sources say that Jesse McCartney also participated on the creation of the album that never was published.

she also sang on Stephen Jerzak’s song “she said”

In this version of the song we can hear Leighton’s vocal range change from pop to light country style. And in 2010 Leighton Meester recorded a song for Country Strong movie in which she also starred. The singles Leighton Meester made covers of in this film was: Summer Girl, which was a promotional single, also Words I couldn’t say, written by Rascal Flatts, A little bit stronger, by Sara Evans and a duo with Garrett Hedlund – Give in to me. After the release of the movie, Leighton revealed that she was inspired by its musical part and she was having fun composing folk style music. She said that, this music style is where her heart is. She named Neil Young, Joni Mitchell as her influences.

In 2014 Leighton finally releases a song named Heartstrings and announced her debut LP with the same name coming out soon. Producer Jeff Trot was helping with Leighton’s Heartstrings project. After a few years of silence and unaccomplished plans, it seems that Leighton Meester’s career is restarting. She not only released a new single, but also made a fabulous cover of Fleetwood Mac’s Dreams featuring singer Dana Williams. Here you can watch Leighton Meester’s music video of this song.